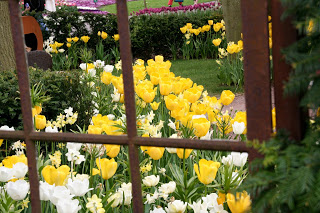 Hey everyone, I’m in sunny Florida today! Relaxing on the beach and reading fabulous books.

April Fool’s! I’m not. I’m at home in an oversized sweatshirt and flannel pajama pants sipping coffee and about to get started on my WIP.

But seriously, I am somewhere else too.

I’m at Jennifer Hale’s blog today talking about winter seasons. I feel you should come over and chat with me. Not via Skype (refer to previous statement of what I’m wearing.)

The young girl bundled up and went out into the cold bitter wind, like she did everyday.  It was a long walk to the shoe factory where she toiled hard each day in order to make a few dollars a week to help her mama raise four other little girls.  She wasn’t much older than thirteen.
Each morning she would walk by a hat shop.  In the window were many beautiful hats displayed in every color and design.  She loved hats.  Every Friday afternoon as she would pass by that shop she would sigh and dream of owning just one of them.  She would wonder what it would feel like resting on her head of dark hair.  A crown maybe? She would put her hands deep into her old tattered wool coat pockets and feel the little bit of money she had labored all week for, close her eyes and wish just once she could use that money to buy something she desired.
Instead she would come home to four little sisters.  She would do laundry, feed the horses, get supper ready, bathe the girls and get them to bed, and then tidy the house before mama would come home from working her job all day long.  She wondered where her daddy might be, he had been gone so long… and then she would dream of the hats.
Her mama dreamed as well.  She dreamed life wouldn’t be difficult and unfair, that she wouldn’t have to raise five little girls alone, that her husband would have never left and that he would have loved her. She dreamed that her oldest daughter wouldn’t have had to grow up so quickly and work in a shoe factory she hated and that those few dollars she carefully placed into her palm each week could be spent on hats—but they were only dreams. If only…
Late one afternoon the little girl came home and on the table was a box.  A round box.  Her heart began to skip a beat.  She had seen the boxes before…in the hat shop by the shoe factory.
Her mama came into the room and smiled.  “Open the box, Dorothy.”
The little girl opened up the box and inside was the most beautiful hat.  She hurried and put it on and danced around the room.  Suddenly she stopped and looked at her mama with wide green eyes.  “How,” she asked in a concerned whisper.
Her mama’s smile was tired as she replied, “It doesn’t matter how, let me worry ‘bout that… it’s a gift”.
This little girl was my late grandmother, Dorothy, and I’m writing a memory of hers to share with you this holiday season.  Giving the sweetest gifts comes with sacrifice.  I don’t know how my great grandmother saved the money to buy that hat or what the cost, but I know it was a great sacrifice.  I know as she watched my grandmother dance about in the beautiful hat, she was receiving as great a gift– making it all worth the while.
Jesus gave the greatest, sweetest gift…salvation…which came at a great sacrifice–Himself. When we accept His beautiful gift, He sees us dance with freedom. Like my grandmother’s hat. A helmet of salvation.
I believe, just like my great grandmother, He smiles and says, “Don’t worry about the cost, let Me…it’s a gift.”
May this Holiday season remind you of the greatest gift given to us and the sacrifice that was involved. May you dance with grateful hearts full of joy around the room and may you have a very blessed Christmas season!
“Thanks be to God for his indescribable gift!” 2 Corinthians 9:15