Well, I hope you all had a great weekend. We spent most of it at the pool. I can’t seem to get my sunblock on correctly and have odd shaped burns in random places on my body.

I told my husband I was going to have to go to the tanning bed to even out the pasty white places to the golden areas (and the cherry red burns of course). He joked I’d probably be the only one in a tanning bed wearing sunscreen.
He might be right.
I ate a German Chocolate Cupcake from one of those fancy cupcake bakeries. Edible glitter, German chocolate filling and a mound of chocolate icing. About 5,000 calories later, I thought I might be sick. Oh but that one moment! And it was a moment indeed.
Okay, so here’s a couple of books I’ve read lately. 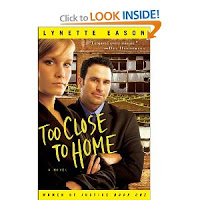 Too Close to Home by Lynette Eason

“Samantha Cash is the FBI’s secret weapon. Her methods are invisible, and she never stops til the case is closed. When missing teens begin turning up dead in a small Southern town, Samantha is assigned to help local Detective Connor Wolfe find the killer. And he has two problems with that. There’s her faith—in God and herself. And then there’s the fact that she looks exactly like his late wife. As they get close to an answer, the case becomes personal. The killer seems to be taking an interest in Connor’s sixteen-year-old daughter, who thinks her dad is getting way too protective. Can’t a girl just have some fun?”

I liked this book. It’s the first book I’ve read by Lynette Eason. I figured out early on why the killer was doing it, but wasn’t sure who it was until about 75% in. Then I didn’t guess the “boss” until it was almost over. I liked the characters and the romance that blossomed.

Both characters struggled with their faith. I think the author made their spiritual joureneys realistic and touching.

I took a keen interest in the sister and want to read the next book that’s about her. I think it will be even better!

“When a dressmaker who values beauty tangles with a liveryman who condemns vanity, the sparks begin to fly!

Jericho “J.T.” Tucker wants nothing to do with the new dressmaker in Coventry, Texas. He’s all too familiar with her kind–shallow women more devoted to fashion than true beauty. Yet, except for her well-tailored clothes, this seamstress is not at all what he expected.

Hannah Richards is confounded by the man who runs the livery. The unsmiling fellow riles her with his arrogant assumptions and gruff manner, while at the same time stirring her heart with unexpected acts of kindness. Which side of Jericho Tucker reflects the real man?
When Hannah decides to help Jericho’s sister catch a beau–leading to consequences neither could have foreseen–will Jericho and Hannah find a way to bridge the gap between them?”

I didn’t know what to expect when I started this book. I don’t often read historicals, but lately I’ve read several and I’m coming to realize, I enjoy most of them. I happen to like a lot of romantic tension and some spice, not all inspirational historicals meet my expectations.

I fell in love with J.T. and Hannah immediately. I loved their banter, internal conflicts, and wit.  I felt like I was living in this time period and it was rather fun to spend a few hours, since I read it in two sittings, with these characters.

I predicted the villain, but I’m not sure that she was trying to conceal it. That didn’t matter to me, though, because I just loved everything else. Especially the romance. No wonder she won a RITA for first book.

I also think it’s a great parallel of the Proverbs 31 woman and a healthy look at beauty and nice things.

So have you read a book lately that you were unsure of, then turned out to be a pleasant surprise?

Okay then…what’d you do this weekend?