Let me preface this post by saying I am in no way making sport, pardon the pun–you’ll see what pun in a minute–but this needs told and I’m going to tie it into how I come up with plots and maybe it’ll benefit you. Or at the very least give you a laugh then a clamped hand over the face and a, “Oops, sorry.”

So, apparently in September of 2009, a fan was injured at a Royals game in Overland Park, Kansas.

Imagine it’s the bottom of the ninth (that is baseball jargon, right–lesson: do your research) the bases are loaded. The crowd is intoxicated with smells of peanuts, cotton candy and victory for the winning team.

Shirtless idiots have painted lion heads on their chests showing off their incredible six packs…of beer. They shake it for the crowd and point at themselves on the jumbotron while sipping more foamy beverages from tubes attached to helmets adorning their heads.

Yes, this is baseball.

The Royals mascot, the lion, with a crown of what can only be assumed as mascot flesh–eeeew–engages the crowd.

Does he roar? Why no. Any lion can roar. Does he do the macarena? No, that’s so not even retro. Moonwalk? Moon? He’s the king of the jungle.

No, this lion launches a foil wrapped wiener into the stands.

The hot dog strikes the man’s eye, which according to the news article, results in two eye surgeries. I feel for him. “Dude, what happened?”

Can you imagine the off-color jokes that have followed him these past years?

Anyway, eeeeww…and moving along. The guy sues. Naturally. I’m not making this up. You can read the article HERE.

But the plot is endless isn’t it? What if the mascot was a woman? A jilted lover with the attempt to bean her ex–after all he is with another woman. What if she paid the real mascot to let her in the costume b/c she’s got a crush on a player? Then beaning a random stranger gets her in big trouble.

What if the guy she smacks with the hot dog does get hurt, but not severely, and they end up getting together. Let’s be honest, how many inciting incidents have you ever read about started off with someone punting a hot dog into the hero/heroine’s eye?

What if a mascot really did injure a man’s eye and he was a pilot? Now he can’t work, he loses he wife, family, home…so he comes back for revenge.

There are all sorts of ways to come up with fresh story ideas. All you need to do is read the news.

What crazy stories
have you read about lately? And give me a premise based on this story. You don’t have to be a writer and it can be off-the-wall. It’s for fun, not for an editor or agent!
Have a great weekend!
*I didn’t go anywhere this week, notice? I haven’t decided if I want to stick with that series. So…we’ll see. 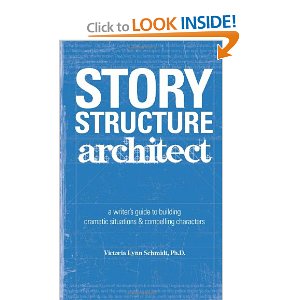 I’m not a serious plotter. By that, I mean I don’t know every single scene and how many words each chapter will be or how many chapters the story will actually have.

I do know my major plot points, beginning and end. Everything in the middle is a discovery to me. I can fix any issues in the editing process.

I’m plotting a new story (major plot points); it’s in the baby stages–not even ready to send to my agent to say, “What do you think? Should I run with this or call it a day?”

Craft books have come in handy for sure, but truth is I like to apply that knowledge (mostly) when I go into the editing process. My first draft is all about imagination–seeing it play out like a movie in my head and exploring along with my characters.

I’m looking forward to figuring out the middle main plot points so I can write up a synopsis and send to my agent. I haven’t written from a clean slate in over a year. Maybe two. I had so many mss under my belt, I’ve been taking them from first drafts to polished pieces.  Although I admit, after all the editing/polishing they are like new books. I’m finally about to send off the last ms to my critique partners and get a green light on this new book to write. Hopefully. I’m pretty excited about it!

I’ve been reading Story Structure Architect and it’s wonderful. I’ve been using it to plot out my main stuff and it’s been very helpful. I’m curious how much tighter my first draft writing will be compared to my previous ones.

Check out my Pinterest page to see more craft books I’ve thanked God for! Also, you can catch a sneak peek at my new plot ideas for the book. I tend to develop ideas as I research, so I’ve been imagining a few things!

Writers: Are you plotters, pantsers or somewhere in between and what craft book/s do you recommend?
Readers: Are you on Pinterest? Let me know in the comments and I’ll follow your boards!
I’ve been asked to share my method of penning a story.
Here it is:

…there really isn’t one.

But this is how it works for me when I’m writing contemporary romance (with suspenseful elements). I also write romantic suspense and the plotting is different.

Generally, it smacks me in the face during my early morning time with the Lord. I’ll see a face, hear a voice and a scene of some sort pops in my head. For example: When I wrote the Precious Gems Saga, I was reading Isaiah 54. “And I will make your pinnacles of rubies (Pigeon’s Blood was born) your gates of crystal (Crystal Gates) and your foundations of sapphire (Sapphire Foundation).” Each female character paralleled that particular jewel. I studied the stones and as I did, the characters developed.

After I wrote those three books, I knew it wasn’t finished. The characters weren’t ready to say goodbye just yet and new stories formed–with their children. The Wayward Children Trilogy, was born.

Plotting happens while I’m on the treadmill walking. Not when I run because I have to consciously remind myself to breathe. But when I’m walking, characters tell me who they are, what they’ve been through, what they want and how they think they should get it. I don’t alway agree with them, but what do I know? I see these things happen in live scenes. Like watching a movie in my head. The kind of music I’m listening to at the time sets the pace of the scenes I see.

I don’t always write the scenes down because I remember them, but sometimes when they say something very smart-alec or profound, that I can’t come up with on my own, I jump off the treamill and scribble it on a post-it. Or if I’m cleaning, I stop (great excuse to put the Pledge down) and find my post-its.

I rarely get the beginning scene right off-the-bat. The middle and ending happen first. Once I  have the basic structure and know who my characters are (because they tell me), I research anything necessary– which is always– and then I write.

Not really, I wish. I have to make it happen. I used to sit in a double size chair in our den with my laptop and skull candy. That’s where I wrote most of my manuscripts. I now have a sweet writing desk in my bedroom.
I don’t need solitude, but I like it. I stuff my skull candy in my ears, crank up the music I’ve seen the scenes to and I disappear. Sometimes, I’ll play one song over and over for hours at a time. Writing is the only time I forget to eat.

I write all day on Tuesdays and Thursdays because I’m home and my kids are at school. On MWF, I get to come home at noon and write till I get the kids. I don’t usually write on weekends unless everyone goes to bed and I can’t sleep. Then I may work until 1 or 2 in the morning, especially if I’m nearing the end.

Somewhere in there, when it comes time for the twist, I stop and outline the rest of the novel. Just a paragraph for each scene to walk me through where I’m going, which will keep me organized, and then I bring it on home.
Now, my FBI Hornet’s Nest series is a whole other brand of cereal. The plotting is very different and more structured because it has to be in order to keep up with everything. I’ll write about that another time.
Have a great weekend!

* The winner for Gray Matter, is Terri Tiffany! Congrats!