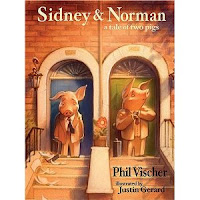 “The pig on the right was Norman. He was a very good pig…Norman figured that everyone could be as good as he was, if they’d just try a little harder. He wondered why they didn’t…The pig on the left was Sidney. Things didn’t come quite as easily for Sidney…Sidney felt broken. And some days that made it hard to get up in the morning. Some days, in fact, Sidney couldn’t get up at all.”

Sidney & Norman a tale of two pigs was written by Phil Vischer. You know Phil. Creator of Veggie Tales. This is another one of those children’s books that speaks volumes to adults. I picked it up at the Christian bookstore, began reading it, and cried right there in the middle of everyone. My friend, who worked there at the time, called my husband (after I left and without telling me) and told him he might want to come in and buy a special book for me. A day or two later, I came home and it was lying on my pillow. Tears. Sniff.

Norman is the typical overachiever. He’s good at everything. He dresses perfectly with no spot or wrinkles. He’s the teacher’s pet (pardon the pun) and his boss’ favorite. Of course. He  prides himself on being the best–looks down on those who aren’t as “good” as he is and wonders why they simply don’t work harder.

One day, the two pigs received the same letter. From God. “I would like you to come visit me at 77 Elm Street next Tuesday at your convenience. I have something to tell you. Sincerely, God.”

Isn’t that just like God…to invite us to come and hear a word from Him, but at our convenience? He never pushes us. Some of us run straight to Him; some of us balk and stew about it.

Norman ran. Why? “Anticipation. Happiness. Pride.” He was about to be honored and awarded for being good. He couldn’t sleep because of his excitement.

Sidney felt much differently. “Terror. Panic. Doom.” It was like being sent to the principal’s office. He was always in trouble for something.

The day came. Norman walked tall. Looked his best (as usual) and strutted straight to the address.  He walked inside…he saw God.

“First of all, God began, “I love you.” Norman smiled, though he wasn’t surprised. “Secondly, your goodness isn’t the reason I love you.” Norman was startled. “Thirdly,” God continued, “you’re not as good as you’ve led yourself to believe. You’re prideful. You’re selfish. You look down on others…”  God looked a little sad now…Then God smiled and returned to his desk. “That is what I needed to tell you.”

Not much of an award in Norman’s opinion. How could God find fault in him?

Sidney dreaded his day. He put it off…and off until he couldn’t wait anymore. He made his way to the address and into the office. Doom hung on him like a cape. He was such a rotten pig–never getting things right.

Sidney was confused at first, wondering how God could love a little ole’ messed up pig like him. But that conversation–changed him. Those reassuring words from his Creator–“I love  you.” Three times God told him. Because, God did love Sidney and wanted him to know it. If He needed to tell him 100 times, He would have.

He loves you too. If you’ll stop balking and just meet Him, those words will do things to you that you never imagined they could.

Maybe you’re Norman, and you need reminded that you aren’t perfect–even if you seem to do things better than others. God loves you as well.  He loves me too, whether I’m in a Norman season, or a Sidney season.

I love that Phil chose pigs. Pigs in the OT were considered unclean. Which without our Savior’s grace and shed blood–is exactly what we are. But God loves us.

To find out the rest, read the book. See how their lives change. For the better. And remember…God loves you. He wants to invite you to come and see Him, just to let you know it. You can read about His love for you all day long and know it in your head, but sometimes you need to get alone with Him, and let Him speak those words to your heart. Personally.

What book are you reading right now?