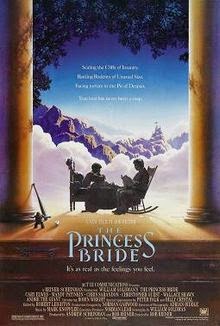 Welcome everyone to our second part in The Princess Bride
series. If you missed week 1, you can check it out HERE.


Here is the moment of truth. Buttercup has believed Westley
wasn’t who he said he was. But as he fell, she heard those familiar words
spoken to her.
As you wish…
And down the hill she follows her true love who she thought
was dead.
First off, let’s watch the clip!

I love this small clip of conversation. He’s alive and she
can do more than move! She can fly.

“He doesn’t play hide-and-seek with us. He’s not remote;
he’s near. We live and move in him, can’t get away from him!” Acts
17:28 MSG
Westley had been there the whole time rescuing Buttercup,
but she refused to see him. I bet if she’d really looked, she’d have recognized
his eyes. Now, I admit, Westley was playing a bit of hide and seek but all for
the purpose of testing his beloved. “Did you miss me? Did you think about me?
Have you fallen out of love with me?”
God often tests our hearts as well.

“the refining pot is for silver and the
furnace for gold, But the Lord tests the hearts.” Proverbs 17:3 NKJV
“I told you I would always come for you…Death cannot stop
true love, all it can do it is delay it awhile.”
Ever felt like God was far off? Uncaring? Unloving? You’ve
wondered where he’s gone? Especially when you’re living in the pits, with
heartache. Or in an out of control situation? Buttercup was grieved because she
thought her love had died. She was now being forced into a marriage and there
was no way out. Buttercup had lost all hope. In fact, she was contemplating
suicide and even attempted it (until once again Westley saved her)
He was there when she needed it. It was never too late.
Might have felt like it to her, but it wasn’t!
God has not abandoned you. He is not dead! He’s near.
“Draw near to God and He will draw near to you.” James 4:8 NKJV
Buttercup realizes just how near and real Westley is, and
she says, “I will never doubt again.”
To which he responds, “There will never be a need.”
Friends, you have no need to doubt your First Love. He’s
mighty to save. Mighty to rescue. He’s close. So very close. Feel His presence,
His embrace to your heart.
And know. You need never doubt again.

***Have you entered to  win Sarah Varland’s newest novel, Tundra Threat? You still have time! The giveaway ends on Thursday, October 16th. CLICK HERE to enter!

***Join me next Monday as we venture into the FIRE SWAMP!

***Have you signed up for the Patched In newsletter? I’d love for you to and to say thanks, if you do, you’ll receive an exclusive Christmas novella, Hope Under Mistletoe, by ME when your confirmation of subscription comes by email!

Why do you think it’s so easy to doubt?
photocredit:Wikipedia