Ever been homeless?
Ever known anyone who has? Jennifer Slattery is here to share the inspiration behind
her debut novel, Beyond I Do, and some fun facts about herself. Thanks for
being here, Jennifer. Take it away!

Have you ever been
surprised by something, only to find everyone else around you knew of this
*thing* all along? I wonder if that’s how a writer’s voice emerges. If one
begins to write something into every novel
without realizing it because that *thing* is as much a part of them as writing
itself.
That’s how it was for
me. One day, as I was chatting about one of my books with a friend, I paused
for an extended moment and said, “Have you noticed I’ve had a homeless person
in each of my novels?”
My friend gave a
knowing smile and nod, and it was then that it hit me, “Yeah, this is kind of a
big deal to me.”
Which will probably
sound strange, once you learn that I was once homeless. I mean, of course it’d
be a big deal, right? Homelessness had affected my life greatly!
But that’s the funny
thing about self-deception and hiding. You see, homelessness affected who I
once was, not who I am now. (Or so I thought.) Ashamed by my
past, I had pushed it so far from my mind I could easily forget that period
entirely. I certainly never thought about it. Except on those quiet, lonely
nights when old demons would rise up, “Remember when?” But then I’d just push
the memories down all the harder, trying to play the part of the perfect,
church-going, suburban housewife.
But God never forgot,
and the God who brought me from my deepest pain and shame wanted to turn it
into something beautiful.
That’s grace.
And as a recipient of
grace, God now wanted me to show others how to grab hold of that same
life-transforming, shame-lifting power.
Though it goes a bit
deeper than that. Now, decades later, camped out in mid-America suburbia with
my middle class friends, many who have never truly encountered a homeless
person; many who perhaps don’t even give them the time of day, God has called
me to another task. That task is helping to call others to action.
I believe that’s why
He birthed the idea for Beyond I Do
within me.
And that’s the impact
I hope this novel has on my readers. For those suffering from material,
emotional, or spiritual poverty, I hope they can see that the same God that
reaches out to the least-of-least is also, always, reaching out to them.
For those of us who
have been rescued, I hope this novel encourages them to look around and see how
they can bring God’s hope and grace into the broken lives they encounter.
On a lighter note…
Jessica asked me to share three fun facts about me. Here goes:
1     I’m
terrified by heights but once took up rock climbing with my hubby. This, of
course, meant there was always more than a few shrieks (and broken nails! Hence
the shrieks.) involved.
2
Apparently
my head bobs at neck-breaking speed when I’m writing an intense or humorous or…
okay, when I’m writing period. Imagine the entertainment Starbucks’ patrons
gain from my presence.

I can
turn many a-heads during the Sunday worship service, and not in a good way. (I
was kicked out of campus choir in high school Enough said.)
I loved these fun
facts and the inspiration behind your novel is moving! I can’t wait to read it!

Here’s a peek at: 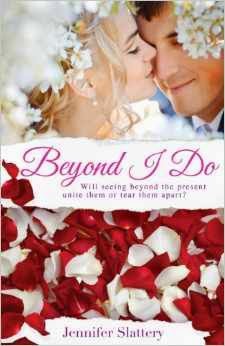 Will seeing beyond
the present unite them or tear them apart?

Marriage . . . it’s
more than a happily ever after.

Ainsley Meadows, raised by a hedonist mother, who cycles through jobs and
relationships like wrapping paper on Christmas morning, falls into a
predictable and safe relationship with Richard, a self-absorbed socialite
psychiatrist. But as her wedding nears, a battered woman and her child spark a
long-forgotten dream and ignites a hidden passion. One that threatens to change
everything, including her fiancé. To embrace God’s best and find true love,
this security-seeking bride must follow God with reckless abandon and realize
that marriage goes Beyond I Do.

Purchase link: http://www.amazon.com/Beyond-I-Do-Jennifer-Slattery/dp/1596694173/
Jennifer
Slattery writes missional romance for New Hope Publishers, Christian living
articles for Crosswalk.com, and devotions for Internet Café Devotions. She also
maintains a personal blog at http://jenniferslatterylivesoutloud.com and writes and edits for
Christ to the World Ministries, an international ministry that shares the
gospel, via radio waves, with thirty-two countries.


*** I’m going to be taking a blogging break but don’t worry! I have some great guests scheduled on Fridays in August! So I’ll still be around some.


***Have you signed up for the Patched In? What’s that you say? My newsletter! And I’d love for you to! CLICK HERE

5 thoughts on “Beyond I Do with Jennifer Slattery”